Growth promoters are extensively used in modern aqua farming for promoting healthy growth and productivity. For optimum growth of shrimp, it should be fed with a nutritional diet that contains sufficient essential amino acids, fatty acids, vitamins, minerals. The nutrients present in the feed may not reach shrimp due to various factors.

Economic impact due to EHP and Vibrio diseases

Asia’s combined aquaculture production currently exceeds 99.10 million tonnes and yet despite its 6.58 % per annum growth, it is marred by episodes of disease that continue to result in major economic loss. In India, the gross national loss in the country due to shrimp diseases was estimated as 48717 metric tonnes of shrimp valued at Rs. 1022.1 crores, and employment of 2.15 million man-days.

EHP is an intracellular microsporidian that replicates within the cytoplasm of the affected tubule epithelial cells in the hepatopancreas, which affects mainly cultured shrimp P. vannamei in several southeast Asian countries. The main clinical signs of EHP-infected shrimps are growth retardation, which leads to increased variability of the size, softshells, lethargy, and empty midgut is seen in more advanced stages.

Signs and symptoms of WFS in shrimp:

The causes of white feces may include poor quality of feed (presence of anti-nutritional factors or mycotoxins), bacteria (a number of species of Vibrio), algal toxin (cyanobacteria), gregarines, and EHP. All of the factors have been seen to damages the hepatopancreas. When the hepatopancreas, the largest
internal organ in shrimps, is compromised and damaged, we observe “white feces.” Several problems are associated with the WFS, including reduced feeding, reduced shrimp growth, size disparities and chronic mortalities.

Use of feed supplements

The application of immunostimulants in shrimp aquaculture is increasingly gaining interest as an environmentally safe alternative to antibiotics and chemotherapeutics. Diets containing immunostimulants are used in aquaculture in order to increase resistance to stress and diseases of cultured fishes and invertebrates. To provide nutrients required for the growth of shrimp growth promoters are fed to shrimp. This contains all essential nutrients in the right amounts helps in normal growth and improving performance of shrimps.

Management and control of shrimp diseases

The Best Management Practice (BMP), quarantine system and good feed management practice are to be followed during the entire culture period to overcome the disease problems in shrimp culture.

Rehpairo is a safe biotechnological phytogenic supplement for controlling the EHP infection, preventing retarded growth, and increasing the efficiency of high protein in aquafeeds.

It not only enhances productivity but also helps to improve the quality which positively influences processing characteristics. If the amino acids profile is poorly correlated to the requirement of the shrimp, then it leads to lower retention of synthesized protein. Rehpairo improves the retention of the synthesized protein from the feed leading to higher growth rates.

Rehpairo is 100% natural in origin. The herb derived Flavonoids and Piperine of Rehpairo prevents adhesion of EHP spore tubule to the epithelial cells of shrimp hepatopancreas. It controls the reproductive cycle of the EHP organism by preventing their entry and its polar tube extension to the pancreatic cells by digesting the polar tube components.

The other phytoactive from Allium and Piper Sp. enhance the recovery of shrimp digestive and hepatic systems and improve their health condition and immunity. The hepatopancreas supports digestion, immune regulation and other functions, which are related to most shrimp diseases.

Owing to its positive impact on nutrient efficiency, it also addresses environmental concerns of eutrophication and pollution associated with excess nutrient waste.

Uses
Powder application makes it easy to use at the affected ponds with a suitable binder. Recommended uses are 2 kg per metric ton of feed.

Click on REHPAIRO to know more about the product, reach us out at [email protected] if you have any queries. 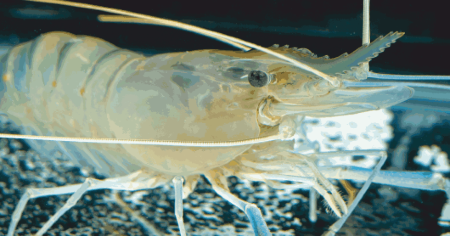